Lately, I have been freezing cut-up ripe bananas and then adding them to my steel cut oats in the morning, and I had been noticing that my tummy wasn’t feeling as great.  I had been using a half of a banana.  Today, I used a very small amount of banana (10 g) along with 1 ounce of frozen blueberries, and my tummy is much happier.  While it’s frustrating to see something I ate frequently and is easy to find go from being classified as low-FODMAP to being high-FODMAP, I am grateful that researchers figured out what is causing digestive distress for so many of us and that they are continuing to do research.

Here’s a link to the update on the Monash University blog that gives all the details.

I had been working with a nutritionist who suggested the recipe from my local co-op for five-color quinoa salad.  While it wasn’t low-FODMAP as written, it wasn’t hard to modify, dropping the red onion and apple and substituting garlic-infused olive oil for the garlic and some of the olive oil.  Sherry vinegar wasn’t listed in the Monash Uni low-FODMAP app, but I decided to try it since (1) 2 tablespoons of apple cider vinegar is low-FODMAP even though apples are not low-FODMAP and (2) it’s a small amount, 1 tablespoon divided among 4-8 servings and this is a low-FODMAP diet, not a zero-FODMAP diet.  While it worked for me, your tolerance may vary.

I didn’t want to get fresh marjoram or basil since the recipe asked for only 2 tablespoons, so I tried making it without, increasing the parsley.  Didn’t even occur to me that anything was missing.

I wasn’t sure about 3 tablespoons of olive oil in a recipe that called for 1 cup of quinoa, and it was oilier than we wanted, so we added some cherry tomatoes and Romaine lettuce that we had on hand.  Yum!  The sherry vinegar and lemon zest were a refreshing change.  The yellow pepper and purple cabbage were beautiful together.  And the toasted walnuts, well, what isn’t better with them?  Did I mention the Kalamata olives?

To round out our meal, Italian Baked Tofu was a great complement.

Chopped romaine (optional, up to 1 oz/serving)

I recently returned from a 4-week, self-catered trip to Australia.  I thought that eating low-FODMAP might be easier there, plus there is fabulous wildlife and scenery.  Well, the wildlife and scenery were great!  I was in Sydney for a few days before heading up to the Cairns area.  Few people had heard of FODMAPs.  Maybe it’s better around Melbourne.  Fortunately, I had made reservations at places where I was able to cook, and I bought an esky (Australian for a cooler) at Target.

My favorite grocery was Woolies (aka Woolworths).  They had lovely produce (amazing carrots!) and large stores to supply some of the rural areas in Northern Queensland.  The shop in Mossman was fabulous. 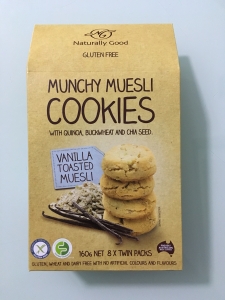 I did find some foods with the low-FODMAP symbol meaning that they have been tested and are certified to be low-FODMAP.  “Munchy muesli cookies” come in 4 flavors, all low-FODMAP.  While I didn’t think they were fabulous, they were nice when I wanted a little something sweet, and they come in twin packs within the package, so they were nice for an outing.  I tried the vanilla toasted and cinnamon spice flavors.

It was fun to see some of Sue Shepard’s gluten-free candies available at one grocery, so I tried the jelly beans, which according to the Shepard Works website are suitable for a low-FODMAP website.  Unfortunately, I was disappointed in them, probably because they weren’t exactly what I was used to and hoping for.

I also got a bottle of Cobram estates garlic-infused olive oil.  Wow, is it potent!  It would be great for those recipes where you want a lot of garlic flavor without a lot of olive oil.

When I want bread at home, I usually opt for a modest amount of slow-rise sourdough bread.  In Australia, I had Country Life Bakery gluten-free white bread, which appeared to be low-FODMAP, and according to their website is certified low-FODMAP but did not have the symbol on it.  (Note:  their gluten-free multigrain does NOT appear to be low-FODMAP.)  It was pretty widely available at Woolies (aka Woolworths), it wasn’t crumbly, and it stayed fresh in a plastic bag.  While I’m not a fan of plain white bread, I was delighted to have this as an option for a sandwich or toast with peanut butter. 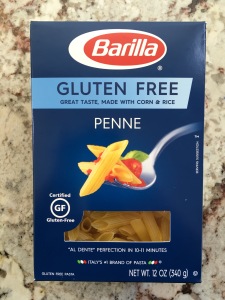 We tried a couple gluten-free pastas that looked like they were also low-FODMAP, but had not been certified as such.  We were pleasantly surprised by Barilla gluten-free penne.  Our previous experience with corn-based gluten-free pastas was that they fell apart, but this one didn’t (maybe it’s the rice flour) and was a lovely alternative to semolina pasta.

I fell in love with Lindt Excellence 78% cocoa bars.  While I don’t see them on the US Lindt website, I was able to find them at a local grocery store.  I’m a dark chocolate fan, and these were dark and rich and my new favorite chocolate (US version shown).

One of our other decadent delights was Red Rock Deli sea salt potato chips.  We thought they were the best potato chips we’d ever had.

While I had some frustrating times in the grocery store consulting my Monash Uni low-FODMAP app, I did eventually find food to eat.  I tended to err on being careful, and I felt good almost all of my trip.  I had a bit of a tummy ache one day, but I tried not to obsess about it, and it quickly passed.  I did enjoy having some new foods to try!

Now that I’ve started eating some pasta, I wanted a basic vinaigrette so that I could have a lovely salad to complement the pasta.  I haven’t bought salad dressing in a long time, but my go-to recipe requires shallots, which are not low-FODMAP.  The good news is that garlic-infused olive oil is!  If you’ve never tried making your own salad dressing before, this might be the time to start.  This recipe is super easy to put together.

You might want to add some Dijon mustard or some herbs or try a different kind of vinegar.  It’s up to you!  You might like a lot more olive oil than we do.  That’s A-OK.  You’re making it for yourself, not for me.  You can use this recipe as a starting point, taste a bit on a piece of lettuce, and adjust it so that it suits your taste.  Of course, in a salad dressing, you can really taste the oil and vinegar, so you’ll want to use good-tasting ones.

5 T extra virgin olive oil (or more to taste, we like it vinegary, you might want up to 10 T here)

Mix together all ingredients well.  Taste some on a bit of lettuce.  Does it need more olive oil to suit your taste?  Don’t hesitate to add more if it tastes too vinegary for you!  Enjoy!

I had a craving for some pasta, so I went in search of a low-FODMAP pasta.  I knew from past experience with Tinkyada pasta that brown rice pasta could be very nice.  My local co-op now carries “Jovial” brand brown rice pasta instead of “Tinkyada,” so we gave it a try.  (I have no connection to either brand.)  It was excellent, and it didn’t leave as much starch in the water as Tinkyada does.  We enjoyed both the penne and the spaghetti.  Stay tuned for posts on marinara sauce and a tempeh bolognese!

I’ve been enjoying trying new recipes from Jo Stepaniak’s Low-FODMAP and Vegan.  Her “Creamy Lentil and Coconut Soup” is super simple to put together (toss things in a pot, simmer for 20 minutes) but is so rich and warming and so, so good!  It’s still rainy and cool here in the Pacific Northwest, so we’re having it for lunch today.  If it’s warm where you are, you might want to tuck this idea away until fall.  I probably would have called it something like “Indian-inspired Tomato-Lentil Soup” because it’s fully of spices that remind me of a curry and the tomatoes are more in the foreground and the coconut milk is more in the background, lending a beautiful non-dairy creaminess and richness.

The soup is lovely as is, with a small portion of slow sourdough bread and a salad on the side.  I’ve turned it into something more substantial by omitting the water, adding a chunky diced roasted red pepper, and serving it over brown rice.  (Leftovers are best if the roasted red pepper is added just before serving so that they keep their punch.)  Today we’re having it with fire-roasted tomatoes rather than plain tomatoes.  It’s also good with diced Yukon Gold potatoes (best if diced small and simmered in the soup).  It would probably be good with some brown rice added too. 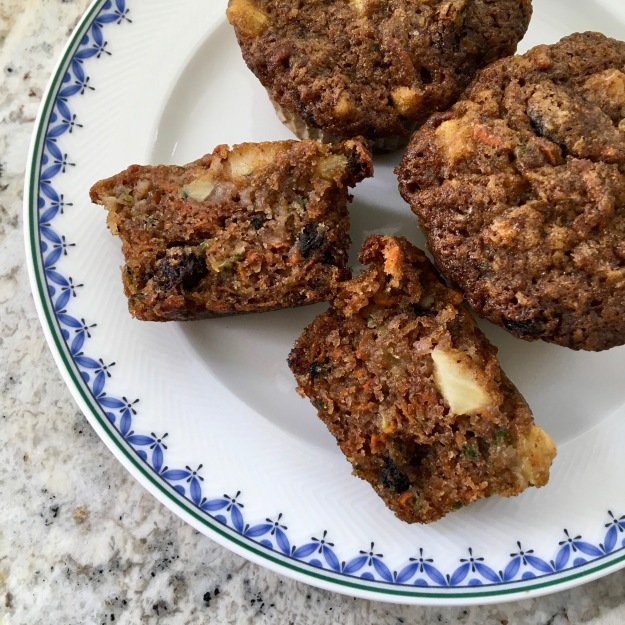 Wow, what a treat!  Decadent, yet full of fruit and veggies.  While it may seem strange to have zucchini and carrots in a muffin, think zucchini bread and carrot cake!  And cinnamon!  Even if you’re not a baker, this could be a good place to start.  Muffins are pretty simple and forgiving, especially with gluten-free flour.

I tweaked this recipe, which was pretty simple to make low-FODMAP.  I substituted a low-FODMAP flour for the traditional flour, and I substituted 1 cup grated zucchini for the apple.  I also used fresh pineapple rather than frozen and unsweetened coconut rather than sweetened because that’s what I had on hand.

Supposedly, they’re better the second day, but we thought they were great after a little cooling.  They also are supposed to freeze well, and I’m looking forward to freezing some, and then having one as a treat or to take on a field trip.

Low-FODMAP cautions:  Limit to 1 muffin to keep low-FODMAP because of the raisins (1 T of raisins is low-FODMAP).  These muffins are rich, so they may not be for you if fat is a trigger.  However, although I haven’t tried it, Livestrong.com suggests that you can substitute pureed banana for some or all of the oil.  They were pretty oily, so I plan to do try that next time.  While applesauce is often substituted for oil in baked goods, it would not be a low-FODMAP substitution